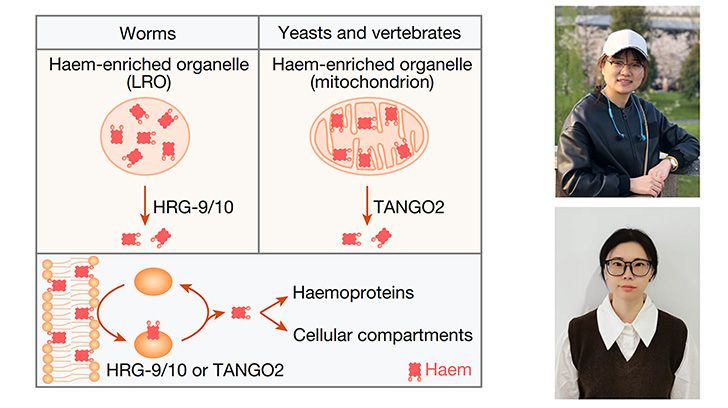 Haem is an iron-containing tetrapyrrole that is critical for a variety of cellular and physiological processes1,2,3. Haem binding proteins are present in almost all cellular compartments, but the molecular mechanisms that regulate the transport and use of haem within the cell remain poorly understood2,3. Here we show that haem-responsive gene 9 (HRG-9) (also known as transport and Golgi organization 2 (TANGO2)) is an evolutionarily conserved haem chaperone with a crucial role in trafficking haem out of haem storage or synthesis sites in eukaryotic cells. Loss of Caenorhabditis elegans hrg-9 and its paralogue hrg-10 results in the accumulation of haem in lysosome-related organelles, the haem storage site in worms. Similarly, deletion of the hrg-9 homologue TANGO2 in yeast and mammalian cells induces haem overload in mitochondria, the site of haem synthesis. We demonstrate that TANGO2 binds haem and transfers it from cellular membranes to apo-haemoproteins. Notably, homozygous tango2−/− zebrafish larvae develop pleiotropic symptoms including encephalopathy, cardiac arrhythmia and myopathy, and die during early development. These defects partially resemble the symptoms of human TANGO2-related metabolic encephalopathy and arrhythmias, a hereditary disease caused by mutations in TANGO24,5,6,7,8. Thus, the identification of HRG-9 as an intracellular haem chaperone provides a biological basis for exploring the aetiology and treatment of TANGO2-related disorders.

Drs. Iqbal Hamza and Amit Reddi are members of the University of Utah Center of Excellence in Hematology (CIHD) U54 DK110858.