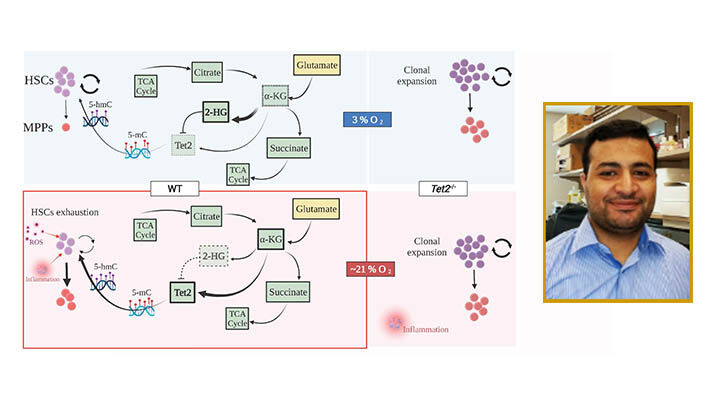 Indiana University School of Medicine-Cooperative Center of Excellence in Hematology

Hematopoietic stem cells (HSCs) manifest impaired recovery and self-renewal with a concomitant increase in differentiation when exposed to ambient air as opposed to physioxia. Mechanism(s) behind this distinction are poorly understood but have the potential to improve stem cell transplantation. Single cell RNA-seq of HSCs in physioxia revealed upregulation of HSC self-renewal genes, and downregulation of genes involved in inflammatory pathways and HSC differentiation. HSCs under physioxia also exhibited downregulation of the epigenetic modifier Tet2. Tet2 is α-ketoglutarate (α-KG), iron and oxygen-dependent dioxygenase that converts 5-mC to 5-hmC thereby promoting active transcription. We evaluated whether loss of Tet2 affects the number and function of HSCs and hematopoietic progenitor cells (HPCs) under physioxia and ambient air. In contrast to WT-HSCs, a complete non-responsiveness of Tet2-/-HSCs and HPCs to changes in oxygen tension was observed. Unlike WT-HSCs, Tet2-/-HSCs and HPCs exhibited similar numbers and function in either physioxia or ambient air. The lack of response to changes in oxygen tension in Tet2-/- HSCs was associated with similar changes in self-renewal and quiescence genes among WT-HSC-physioxia, Tet2-/-HSC-physioxia and Tet2-/-HSC-air. We define a novel molecular program involving Tet2 in regulating HSCs under physioxia.

This work was supported by U54 DK106846 and hypoxia studies performed at the Indiana School of Medicine Center of Excellence in Hematology Hypoxia Core.